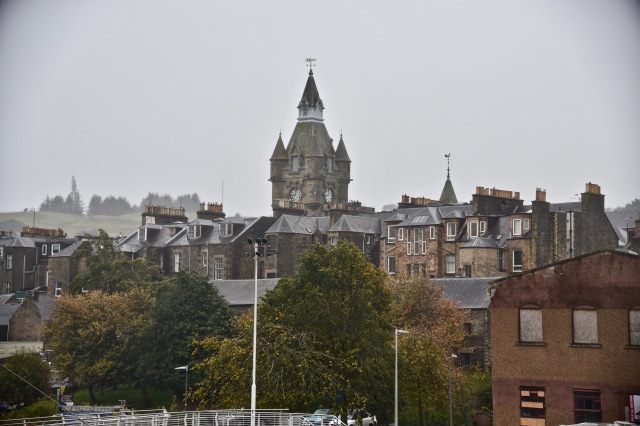 My hopes of writing a blog post while in Edinburgh did not come to fruition so now I’ll recapture some of my observations of Molly Whitelaw’s Scotland. I found my journey of discovery required some revisualisation to find where her footprints were placed as she grew to adulthood over 100 years ago.  Born at Hawick (pronounced hoyk) in the Scottish Borders in 1895, Molly and family, in December 1905, moved to Gilmore Place United Free Church parish in Edinburgh.  Her years there were interrupted by WW1; they left for New Zealand in November 1920. 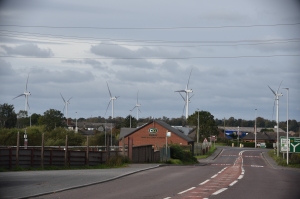 Turn off onto the A7.  I was taken with the wind power generation of which there are an abundance in the UK.

I was glad we, I was travelling with my brother Don, began our journey through the Scottish Borders from the west at Carlisle, once, long ago, part of Scotland. Route A7 is marked as an historic route to Edinburgh and is definitely a captivating journey through quiet, wide valleys, open farmland, the occasional town, and small village with a church that convey a sense of being unpeopled. I felt a little like an intruder as I walked past the few homes standing flush with the narrow public footpaths.

Skippers Bridge south of Langholm over the River Esk.  Nearby on the rivers edge is the Old Whisky Distillery.  The bridge was built in 1700 and widened in 1807.

There was very little traffic compared to the English back roads. Allocated areas for parking were more frequent, some catering for ramblers, which gave us a chance to stop and admire the surrounding picturesque views. The countryside is quite beautiful. Tweed Water or the River Tweed, runs from west to east with its many tributaries and the winding road crosses them numerous times giving wonderful photographic opportunities.The subdued autumnal hues of colour and light, not as harsh as New Zealand’s light, soften the grey stone buildings; the colours were awe-inspiring. Heather

now turning black after its purple summer, various shades of brown as bracken loses its greenery, cinnamon coloured thyme interspersed with shades of green and golden grasses gave the rolling hillsides a magical aura; sites where legends and ballads were made.The Scottish Border countryside with its sense of newness was also strangely familiar with its rolling hills, farmland, and meandering streams and rivers. I wondered whether Molly and her family sensed a little bit of home when they first travelled up the East coast of the North Island to Hawkes Bay in 1921 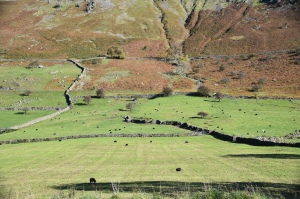 En route on Route A7

Like small leggo bricks creating pencil lines over the hillsides, the dry-stone walls conveyed a pattern of clearly defined ‘ownership’ from days past. I wondered if such quantities of rock resulted from long-ago glacial movements and marvelled at the required skills to build walls that can remain standing for centuries, enduring diverse climates and even the battles of long ago.

I learned that the Borders also had their clearances of mass numbers of people for want of commercialised farming, many emigrating to Ulster and North America. In fact, no cotters remained, unlike the Highlands with its few remaining crofters. Consequently, many villages on the borders totally disappeared and only a few stone cottages and castle ruins remain to tell the grim tale of Border warfare.

Hollows-Tower-near-Langholm-Scottish-Borders, built for defence against the Border Raiders

Somewhere in the far recesses of my mind Walter Scott’s border stories read over half a century ago came to mind as we drove along the now developed roads. The stories of the Border raiders (Reivers) romanticised and glorified by Scott, seemed out of place as we traversed the area. It was hard to visualise on this now peaceful drive, the feuding and violence of the raiders and battles and the devastation caused by 300 years of wars over kingship and kinship between the Scots lowland clans and England and Scotland, described as a ‘throbbing war zone.’

We came upon Hawick, the main purpose of my travels through the Border country, mid-afternoon. A misty drizzle greeted us and it was Sunday. Lack of activity in this largest town in the Borders proved a problem when the booked B&B was unattended. Our phones also decided it was an opportunity to suggest that Sunday was definitely a day of rest. Fortunately, the town’s Information Centre, the only sign of life, came to the rescue, and we were soon settled.

Albert Bridge, Bed & Breakfast is the white building on the left.  Opposite is the the Orrock halls, formerly the Orrock Place United Presbyterian Church. There appears to be a cafe but closed when we were there.

Route A7 enters Hawick following its main streets, Buccleuch and Commercial Roads crossing the River Teviot and Slitrig Water over the Albert Bridge avoiding the town centre. Our B&B sat on the very edge of the River where the Albert Bridge crosses. These waters regular flooding have caused the city authorities much angst over the years. James Shannon, Molly’s father, notes in his diary in 1895 walking into town ‘to view the river in flood.’

The Hawick Parish is first noted in 1214. It was granted a Royal Burgh in 1545 ‘by the guardians of Queen Mary’. ‘At the period of granting the charter, the town consisted of 110 houses, inclusive of the manor house, church, and mill.’ But its settlement dates back to 600AD and a Norman wooden castle with a motte was built in the 1100s.

There are a number of memorials around the town relating to the raiding eras.  The Turnbull statue depicts William of Rule ‘turning’ an angry bull to save the life of Robert the Bruce, said to have occurred in 1313.  It was  unveiled in Hawick in 2007 to mark the town’s links with the famous Borders family, the Turnbulls.

The constant disturbances through the centuries affected the population of Hawick. During the Battle of Flodden almost all men of fighting age were killed. A raiding party threatened the town a year later which brought the boys (callents) of the town out in defence, capturing the English flag in 1514. There is a modern sculpture depicting this event but sadly we have no photograph. The ‘Hawick Common Riding’ commemorates this event annually riding the marches (boundaries) of the Hawick’s historic parish district (Commons). Disapproval among some members of the town over the high-jinks that occurred was debated in the local media on a number of occasions particularly the consumption of alcohol. James Shannon was one of these who felt the goings-on were distressing for many especially the poor and women. Just what these ‘goings-on’ were are not described!

Hawick became known for its textile industry especially Wilton carpets and tweeds. During the latter part of the 1500s, a small textile industry began to develop. From the 1700s a commercial woollen and textile industry made the most of water power from the River Teviot and some 50 or more mills produced carpets, tweeds, knitwear and linen products by the mid 1800s. With steam replacing water power, an increase in the woollen industry resulted in a growing population, and increasing wealth which is evident in much of its Victorian architecture both replacing older buildings and extending into new areas, Wilton being one such area. This increase in population, approximately 3000 in a decade, placed pressure on the Churches to form new parishes.

Thw Wilton Mills in Commercial Road now demolished.  On the right the the low red sandstone wall is what is left of the South Wilton UF Church. (BBC)

Molly’s father commenced a new ministry in South Wilton in 1892 in what was initially named the Ern Kirk due to it being made of corrugated iron. A newly formed parish established as an outreach mission in 1886 called its first minister in 1889. Sadly, he drowned during his summer holiday in 1891. The membership grew rapidly  under James Shannon and a new church was built to seat 650 opening in November 1894. It closed in 1987 and remained empty. Part of the front wall is all that remains having been demolished in 2002.

Remains of the front wall of the South Wilton United Free Presbyterian Church.  In 1940 it merged with St. Margaret’s under the Church of Scotland.  Demolished in 2002. 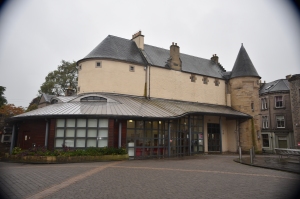 Known originally as Hawick’s Corn Exchange.  In 1910 became a theatre to show ‘moving pictures’.  It became a bar and in 1992 a fire destroyed part of the building.  What remained was restored and extended into the Archives for the Border region.

There were two of a number of significant highlights in Hawick. The first a visit to the Heritage Hub Archives, in a beautifully renovated building with the most obliging Archivists. I appreciated a tour of the ‘sacred storage’ area containing very sleek computerised shelving! To my delight I discovered photographs of James Shannon and several church groups of children and women. A comment on the rear of a portrait of James Shannon confirms the scattered comments I had found during my research. “My father spoke always with the greatest affection for this man”. He was well respected and very pastoral throughout his ministry. The second treat was attending the Harvest thanksgiving service at Roberton Church on the outskirts of Hawick followed by a community harvest meal. Wonderful.

Brother Don went in search of a secondhand bookshop to purchase anything on early Hawick history with success, and I walked in some of the Shannon footsteps in Hawick and Wilton; to their home and the park nearby, the remains of the church, and some of the township. We travelled the roads James Shannon regularly cycled, now very much improved, and worshipped in a church where he preached.

Leaving Hawick we travelled onto Edinburgh, spending time in Selkirk.  A truly worthwhile visit. Molly’s love for the Borders remained with her all her life and I definitely understand why. 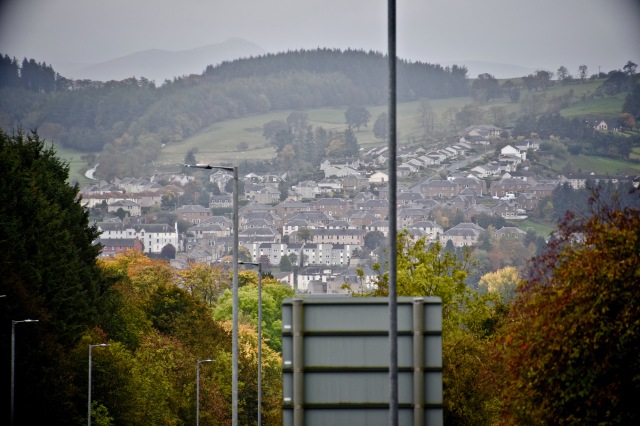 Hawick and its place among Border Mill Towns, publication of Historic Scotland

Project Hawick https://www.facebook.com/search/top/?q=project%20hawick, which I have found very helpful.

Quote of the Month

“Biography, then, is a handshake across time, across disciplines, across genders, across whole ways of life. It is an act of friendship. It is a way of keeping the biographer’s notebook open on both sides of that endless question about the mysteriousness of life. What was this human life really like, and what does it mean to us now? In this sense, biography is not merely a mode of historical inquiry. It is an act of imaginative faith.” Biographer, Richard Holmes.